Definitive data and analysis for the mobile industry

Jio and the rumoured $50 smartphone: reading the signals

Media speculation has surfaced that Reliance Jio is in advanced stages of designing a smartphone expected to be priced around $50. Several Chinese models and prior ventures from would-be challengers to the iOS/Android smartphone duopoly (such as Firefox) have been released in this price bracket over the last 10 years. However, these have involved fundamental trade-offs in capabilities and performance relative to mid and higher end models. Instead, more consumers have defaulted to a new breed of cheaper, basic phones with internet connectivity - 'smart feature phones'. While the Jio initiative would impact only India, the engineering and content enhancements required for such a handset have implications for other developing countries looking to stimulate internet access rates - particularly Africa, where penetration remains stubbornly low. 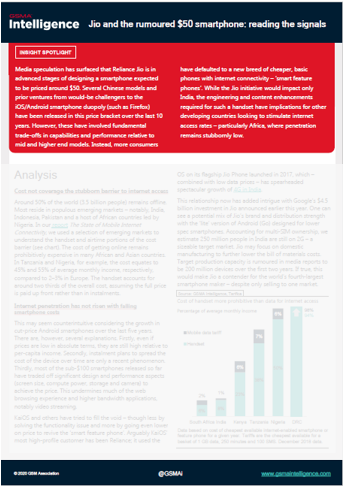 Get in touch with us to find out more about our research topics and analysis.